Imperial Boloball: A Come Back To Stay-At-Home Entertainment (ING)

KUAT (CULTURE) — Boloball has hit the sports centers again across the Imperial Community. The resurgence is owed to the cheery youth's interest in recreational activities. Sports are a popular pastime for the many, be it for casual or competitive - more specifically the game of Boloball, another ballgame favourite alternative to Shockball. The Imperial Gaming Commission took kindly to this comeback and renewed the Imperial Boloball League. The chosen League Administrator was none other than IGC Deputy Director, Max Corrino of the Imperial Navy. He is particularly known for being actively engaged in COMPNOR's events, furthering goals for the New Order. The renewal season, League Season 23 kicked off rather well and had now concluded with Everard de Montfort's Chandrila Boloball Club winning the season's cup, followed by Lord Admiral Drenall's Vandor Vanguard and Marc Farstan's Corellia Boloball Club coming up in third place. 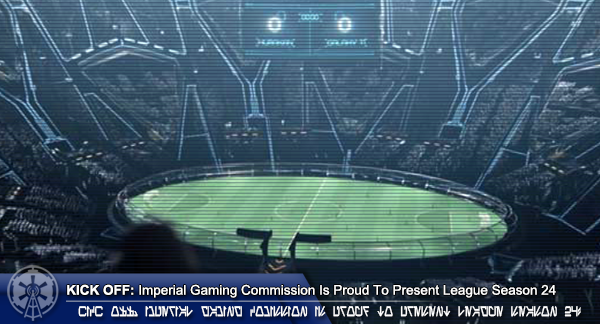 Kicking off once more, and now open to the Imperial Union, Season 24 launched on Year 21 Day 100 with 15 participating teams this time. Imperials signed up in droves in hope of participating in this new season. Notable Imperials from High Command down to the rank-and-file found themselves partaking in the occasion as managers of teams. Teams are classified into two divisions, The upper IBL Division and the lower Division 1. The IBL division is mostly comprised of the previous season's teams however there are new additions nonetheless: Lord Admiral Drenall's Vandor Vanguard; Marc Farstan's Corellia Boloball Club; Fletcher Vern's Corellian Comets rivaling Corellia BC; Lord General Solus' Hapani Hounds; Cihlian Rezik's Nubia United; Grand Vizier Meridan's Royal Coruscant, whose team is rumoured to made up of actual Imperial Royal Guardsmen; the previous season's champion, Chandrila Boloball Club under Everard de Montfort; and lastly, the League Administrator Max Corrino himself, impartially leading the Kuat City Rovers. The lower Division 1 roster is made up of newcomers to the fold: Lord Galen Darksol's Herglic Wailords; Marius Moto's Mat Haulers; Egilhad Amory's Athiss Angels; Minister Nah`utal's Lajak Khals; Andrea Walrus' Kessel Runners; Eliana Nicabre's The Agents; and Alakoth Gar's Anchorhead. With the season underway, we wish all teams the very best as they compete for the prized Emperor's Cup. Stay tuned as it is going be a wild season out there as only time will tell if Everard de Montfort's team will be bested after their victory last season!

In line with the reemergence of public interest in Boloball, the Ministry of Culture is proud to announce the institution of the Imperial Boloball Youth Organization under COMPNOR's Sub-Adult Group to host matches and training courses in schools all across Imperial space as a new sports initiative for the enthusiastic next generation. In addition to junior tournaments and training camps, concepts and practicums of sports medicine will be taught to minors, therefore, fostering basic First Aid skills administering to self and peer. Children who excel in the Imperial Boloball Youth Organization may find themselves playing for the Imperial Boloball teams should they be chosen by its managers.